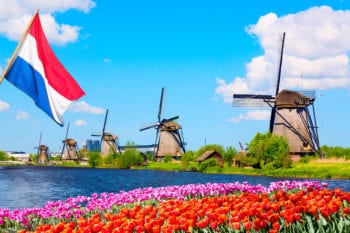 Visitors to The Netherlands: Safety and Travel Insurance Advice

The Netherlands is one of the safest and healthiest countries in the world. In fact, it’s ranked as the 15th safest country by the World’s Safest Country index. It’s also incredibly popular with tourists. The Netherlands is the 20th most visited country in the world. In 2017 alone, there were 17 million foreign visitors. For a relatively small country, with not much more than 17 million residents itself, that’s a huge influx! The majority of those visitors spend most of their time in Holland. Holland makes up just two of The Netherlands’ twelve counties. The remaining 10 counties are quiet by comparison. Thus, for visitors who venture outside of Holland and its principal city of Amsterdam, beautiful cities, quaint towns, and long stretches of picturesque countryside await. There’s still a lot for tourists to discover in The Netherlands! This is the critical information on health, safety, and travel insurance for The Netherlands you need to know before you go.

Travel Insurance in The Netherlands for Visitors

When traveling outside of your home country it is always recommended to purchase a travel medical insurance plan. The Netherlands is no different. Even though it is one of the safest countries, it doesn’t mean you will be exempt from illness or an accident. It’s best to get coverage and peace of mind.

Health Insurance for Expats in The Netherlands

Finding a local doctor should be one of your first jobs as an expat. The local doctor plays an important role in healthcare in the Netherlands. They are the first stop to receive any type of medical treatment.

This insurance covers things like visits to general practitioners and hospitals. And it’s very economical. Both primary and long-term services are offered at a fixed price. Furthermore, it’s illegal for insurance companies to refuse coverage or impose punitive fees.  As well, residents with a local income level can apply for financial assistance.  This helps with the cost of basic healthcare and covering supplemental services.

Emergency Numbers In The Netherlands

The emergency number for The Netherlands is 112.

Hospitals in The Netherlands

In an emergency situation, you do not need to be pre-registered at the hospital. You can simply go to the nearest emergency room. If you’re staying in the country for a long time and thus are signed up to a local doctor they may also have an out-of-hours emergency number. And if you’re in Holland, you can call the Centrale Huisartsen Post (CHP) outside of regular hours to consult a doctor.

Make sure you understand what your travel insurance for The Netherlands will cover.

Tap water is safe to drink in The Netherlands. As well, public sanitation standards are high. There are no major concerns about food safety.

As with all travel destinations, make sure that your routine vaccinations are up to date. Some of these vaccines include measles-mumps-rubella (MMR), diphtheria, tetanus, pertussis, polio, varicella (chickenpox), influenza, and Hepatitis B.

Finding public washrooms is challenging in The Netherlands. There are free urinals in many Dutch cities but the same can’t be said of private toilet stalls. Savvy travelers always keep several coins with them to pay for public toilets. Others simply keep an eye out for fast food restaurants. The purchase of a small soda is a small price to pay for access to a clean and private washroom!

Bike Safety In The Netherlands

The cliche of The Netherlands being a cycling destination is absolutely true. There are indeed more bicycles than people in The Netherlands. The average Dutch citizen cycles more than 3km every day. However, visitors should know that the bike lanes are dangerous spots – but not for cyclists. They’re dangerous for unsuspecting tourists! Another reason to purchase travel insurance for The Netherlands, it is common for tourists to be involved in an accident.

Designated bike lanes are usually painted red and are marked with the symbol of a bike. But bikes are truly everywhere and cyclists don’t slow down for pedestrians. In busy cities like Amsterdam, always assume the road you are on is used by cyclists. Double-check before you cross!

Unfortunately, bicycle theft is common in The Netherlands. Locals use a two-lock system, utilizing both a standard bike lock plus a chain lock. They also look for guarded bike parks to park their bike.

Drug Use In The Netherlands

Cannabis is not legal in the Netherlands. Cannabis is decriminalized and recreational use of it is tolerated. This relaxed attitude towards soft drug use plays an important role in the country’s tourism industry. Figures suggest that 25-30% of people who visit Amsterdam spend time in a coffee shop for the purposes of trying cannabis.

You are allowed to purchase up to 5 grams of cannabis for personal use. That said, you must be older than 18 years old. In some parts of The Netherlands, you also need to be a resident to make a purchase. However, residency rules don’t apply in Amsterdam. You also must visit a licensed establishment such as a coffee shop.  Coffee shops are clean, safe, and welcoming establishments with knowledgeable staff and safe products.

Despite its laid-back reputation, drug use and trafficking are taken very seriously in The Netherlands. You could face heavy fines and a serious jail sentence for trafficking drugs, traveling in and out of The Netherlands with drugs, or using drugs outside a licensed establishment.

The famous Red Light District of Amsterdam. By day, it’s a relatively tame, quiet part of the city. By night – well, it’s also relatively tame but with hoards of tourists. Amsterdam’s De Wallen neighborhood, better known as the Red Light District, is very safe for curious travelers to visit, with two exceptions. Anyone caught taking photos of sex workers will get in big trouble. Taking photos here is extremely disrespectful. Those working there might give you a scary warning (at best) or throw your phone into the canal (at worst). Secondly, this is a pickpocket’s paradise. Pickpocketers thrive on crowds of distracted visitors, something in abundance there.

Prostitution is legal across The Netherlands, not just in Amsterdam. Any consensual encounter between a prostitute and a customer is allowed. But there is a risk of sexually transmitted diseases, just like in any sexual encounter. Just because sex work is legal in The Netherlands doesn’t mean there are any guarantees which negate the use of safe sex practices.

The safety and health of both sex workers and customers are just two of the topics in a growing debate about the future of legalized prostitution in The Netherlands, as per the Financial Post. Of particular concern is that the country hasn’t been successful in preventing human traffickers from profiting from the system.

Passport Requirements for Travel to The Netherlands

The Netherlands is a Schengen area country. Most travelers do not require a visa for stays of 90 days within a 180 period. You can find a full list of what nationalities do and do not need visas or other special considerations here.