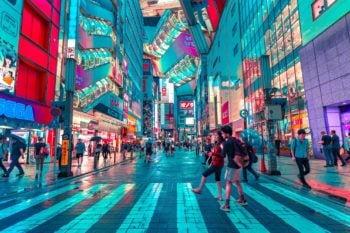 Should you pay for healthcare services while traveling overseas, Japanese health insurance will reimburse you for up to 70% of the cost of equivalent treatment in Japan. While 70% sounds generous, the keyword is “equivalent”. Should you be so unfortunate to break your leg in Germany or have a heart attack in the United States, you are not reimbursed 70% of your foreign bill. You’re reimbursed 70% of what you would have paid in Japan to have similar conditions treated.

Healthcare in Japan is relatively inexpensive compared to some countries. This is thanks to strict regulations and government fee structures. As such, equivalent care in other countries could easily cost 10 times as much as it would in Japan – even more. The final bill may end up being but a small fraction of what came out of your pocket to receive the treatment overseas.

Remember that Japan’s health insurance systems are tied to residency and employment. It’s not designed to cover people who no longer live and work in Japan. As expats, coverage ends as soon as you are a legal resident of another country and/or are no longer employed and tied to employee benefits.

The cost of healthcare in many other developed countries is astronomical compared to Japan. As well, Japan is a rarity in making all its hospitals not-for-profit. In most other countries, a duel public and private system is the norm – and there are significant disparities between them.

A private global insurance policy provides the greatest amount of options and flexibility for an expat living abroad. You will have access to the premium privacy, comfort, and services of private facilities. And can still use public facilities when they’re the most convenient option. Your policy also has built-in support, helping you find doctors who speak your language and navigate the system.

Global Health Insurance for Japanese in the USA

Japanese expats living in the USA will want a premium health insurance plan like the Xplorer plan from GeoBlue. The Xplorer plan offers access to the Blue Cross / Blue Shield network of hospitals and doctors in the USA for foreigners along with excellent coverage worldwide.

Japan struggles with an unequal distribution of medical staff which benefits rural areas over urban ones. However, the opposite is true in most other countries. In large countries, for example the Health Care System in Canada and the Health Care System in the United States, rural healthcare can be very limited, access can be difficult, and quality and can be below average. People living in small towns have to travel further to larger centers to receive specialist care.

When Japanese citizens move abroad, they are often surprised to find out just how important the role of the family physician is in other countries. Under the Japanese healthcare system, you can go directly to the specialist you need. However, in many other countries, you must first be attended to by your family physician. After an initial visit, they will make the referral to a specialist.

This can be both frustrating and helpful. If you know exactly who you need to see, it is aggravating to have to wait. And in some countries, the family physician makes a referral and tells you the appointment date with the other doctor. If that time isn’t convenient for you, expect a lot of back and forth just to get a new time slot. On the other hand, family physicians can provide valuable care and resources to help you.

They also know your medical history and can tailor their recommendations accordingly. If you aren’t sure what kind of specialist you need, or if you feel like you need care from several specialists at once, a family doctor can help you organize your care. They can determine which specialist is a priority and make sure you’re well taken care of in the interim.

Role of Hospitals When Living Outside of Japan

For Japanese expats who are just getting settled in their new country and haven’t yet established care with a family physician, walk-in style clinics or urgent care clinics are more commonly used than hospitals. While it’s not unusual in Japan to go to a hospital for moderate concerns, in many countries it’s reserved for serious emergencies. That’s not to say that you’ll be turned away from an emergency room if you come in with a sprained ankle or a bad cold. However, you’ll be triaged to the bottom of the list. A walk-in clinic is usually a quicker way to go.

It’s also surprising to see how the patient-physician relationship is different in other countries. In Japan, doctors command considerable authority and respect. Hospitals and clinics have rigid rules and procedures. In many other countries, the relationship is more familiar and informal in order to encourage dialogue.

There’s also a greater emphasis on a patient’s right to know the details of their diagnosis and care. Sometimes in Japan, if a person is seriously ill a doctor will inform the family but not the patient in order to avoid distressing them. In most other developed countries, a patient’s right to know is paramount. Speaking with family members without permission is a breach of confidentiality.

From the point of view of public health campaigns, Japan’s smoking rules and regulations are relaxed compared to most other developed countries. Many Japanese citizens are taken aback to see incredibly strict rules on where to smoke in North America, Western Europe, and Australia. Public health campaigns for smoking cessation may come across as aggressive or paternalistic.

As Japan has one of the finest healthcare systems in the world, many things that are taken for granted. Things like state of the art diagnostic equipment, the availability of low-cost generic medication, and preventative health programs aren’t found throughout the world. Or, if they are available, it’s at an additional cost. Japanese expats can expect a period of adjustment, both in terms of global healthcare standards and with regards to how comprehensive coverage is in other countries.

The Japanese passport is one of the strongest in the world. Japanese citizens require no visa or can have a visa-on-arrival at 189 countries and territories. However, proof of vaccinations is mandatory upon arrival in many African countries.

Upon your return home, you should reapply to the NHI or SHI health insurance system which is appropriate to your case as soon as possible to avoid gaps in coverage. You can also arrange for supplemental private insurance to offset the costs not covered through public healthcare.

Written by Joe Cronin. Joe Cronin is the Founder and President of International Citizens Insurance. He is an authority in the areas of global health and international insurance, with specific expertise in advising individuals and groups on international health insurance plans. Follow him @Joe_Cronin_Jr