Hospitals in Hungary for Expatriates and Visitors 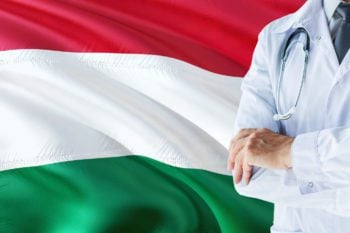 Planning a trip to Hungary? Whether you’re considering travel or are interested in making the country a more permanent home, an important consideration is access to quality healthcare. And that often means accessing the country’s hospitals. Here is a guide to finding hospitals in Hungary.

How Many Hospitals Are in Hungary?

What Kind of Hospitals Does Hungary Have?

Hungary offers its citizens universal healthcare funded by the tax system. This is paid for through a fund called the Health Insurance Fund (HIF). 100% of the population is covered by this insurance. For children, students, pensioners, parents of babies, people with disabilities, the poor, and members of the clergy, this healthcare is entirely free. The rest of the country has to pay into the HIF. The healthcare in Hungary is generally up to the standards of Western Europe, though on the lower end. It is also fast improving. There has been a significant increase in life expectancy. In the two decades between 1993 and 2013, the country saw nearly a 7.5-year increase in the life expectancy of men and nearly 5 years for women.

List of Hospitals for Expats and Travelers to Hungary

Nearly all of Hungary’s private hospitals are located in Budapest. Here is a list of the best hospitals to meet the needs of travelers and expats.

Hungarian Hospitals Outside of Budapest

Hungary’s first private hospital was in fact outside of Budapest, in Telki. Sadly that hospital closed in 2013 due to bankruptcy. Currently, there is a training internal medicine hospital in Debrecen of some quality.

In Case of Dental Emergencies

There is no shortage of Budapest clinics offering quality dental work at an affordable price. Here is one recommended. The Eiffel Branch of Medicover, listed above in Budapest hospitals, offers good dental services as well.

Best Health Insurance Plan for US Citizens Living in Hungary

Are Hospitals in Hungary Good?

Although Hungary’s healthcare system is on par with the rest of Western Europe, the hospitals are plagued by many of the problems common to a socialized healthcare system. These include long wait times and facilities that may not be up to the standards of many Western visitors. This will be especially noticeable to those accustomed to a private healthcare system. It is also worth noting that the pay for doctors is the lowest of all OECD countries. This affects the quality of care. It also leads to many Hungarian doctors choosing to work in the private system instead of the public.

Hungary has a quality public healthcare system and an even stronger private one. Because of that, Hungary has become one of the most popular European spots for medical tourism. This phenomenon began in the 1980s when Austrians and Germans began taking advantage of affordable but high-quality dental care. Dental care remains a core component of Hungary’s medical tourism industry. But with medical treatments 40-70% of what they are in the UK and Scandinavia, medical care has also attracted many visitors. Finally, plastic surgery provides an important part of the medical tourism industry. Facilities that cater to plastic surgery are sometimes combined with spa facilities.

Bring Cash
In a strange hold-over from the communist era, when cash ‘gratitude payments’ were expected for better services, making a cash payment upfront gives the client access to better services and upgrades. This is an especially important tip to remember if you’re traveling outside of Budapest and may need to take advantage of Hungary’s public hospital system. Even at private hospitals, an upfront payment in cash is often required. Hospitals don’t generally bill insurance. Instead, you’ll be expected to pay and then be reimbursed.

Some Expats Use Both the Public and Private Hospital Systems

Once a person has established residency in Hungary, they are entitled to receive the card offering them access to Hungarian’s public healthcare system. For new residents, this will not be free. Rather, they are required to pay into the HIF but is unlikely to cost more than $100 per month. People will combine this with private insurance, allowing them to save money on regular appointments and minor procedures, but insuring that if anything more serious happens, they are prepared.

In addition to offering shorter wait times, private hospitals are where you are most likely to find doctors, nurses, and aides who speak English. It is in the private healthcare industry where the innovation, state-of-the-art equipment, and medical prowess is that is driving the medical tourism industry. Public hospitals in Hungary have a constant shortage of nurses, increasing the level of inefficiency and redundancies in the public healthcare system.

In case the worst happens here are the national numbers you’ll need for an emergency, including a 24-hour hotline for English speakers: