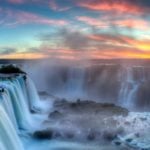 Essential Adventures for your Travel Bucket List A bucket list is the list of things you dream of accomplishing prior to the end of your life. This might sound depressing to some, but it is quite the contrary. Your bucket list is a reflection of your innermost soul; it’s a revelation of where your inspirations […]

12 Things to Know About Traveling, or Moving, to Brazil The largest single-event sporting competition in the world, the 2014 FIFA World Cup, was held June 12 of that year in Brazil. That year’s host country has not only earned a spot in every World Cup competition since the event began in 1930, but it […]