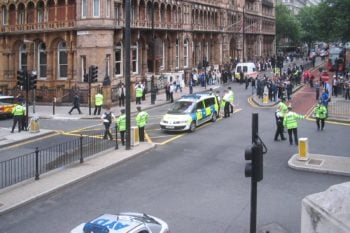 As worldwide terrorist attacks fill headlines, anxiety about traveling abroad has increased. Routinely, travelers to popular destinations such as Paris, London and other European cities may be asking: Is it safe to travel? How can I prepare for an act of terrorism when planning my international trip? Travel insurance is one important component of managing your risks.

The U.S. Department of State issued a Worldwide Caution to all U.S. citizens traveling to help increase awareness and vigilance in going abroad.

Staying Safe – Prepare in Advance of your Travels

The best thing to do to travel safely is to avoid travel to areas known for terrorist attacks.

Read: How to Prepare for, and Deal With, A Terrorist Attack While Traveling

Terrorism Coverage in your Travel Insurance

Most international travel medical insurance plans include coverage for terrorist acts, as do trip cancellation and interruption insurance plans which allow you to cancel or change your plans within a set time before your arrival.

The details of when the plan needs to be purchased and how far ahead you can cancel can vary. Asking questions and researching the best insurance options for you will help to alleviate anxieties you might have about traveling. Purchasing the right insurance at the right time can help put your mind at ease.

Two plans we recommend as they include Political Evacuation and Terrorism Coverage:

Honeymoon in Europe and Terrorist Strike

You plan a second honeymoon to Europe, planning to hit all the sights! A week before you are supposed to leave, there is a terrorist attack at your first stop. If you decided to cancel your trip, travel insurance would reimburse you for the otherwise nonrefundable expenditures, since insurance was purchased before the attack.

Your dream tour through Turkey turns into a nightmare when a terrorist explosion occurs a couple of weeks before your trip. You decide to purchase insurance. Another week goes by, and there is another terrorist incident. You want to cancel your trip. Unfortunately, because you purchased your insurance within 30 days of a terrorist event happening, trip cancellation doesn’t apply.

Cancel For Any Reason Insurance and Terror Attacks

What if there is Civil Unrest While I am Abroad?

You’ve just arrived at your hotel and rioting is breaking out on the street below after contentious election results are announced. You want nothing more than to turn back to the airport and head home. Civil unrest is different than a terrorist attack and is not typically covered by trip cancelation insurance. However, if you were scheduled for a tour and service from your tour operator was interrupted for more than 24 hours. As a result, that would likely be covered by your travel insurance.

It is important for travelers to know that even violent civil unrest might not be covered under their travel insurers’ definition of terrorism. Typically, the U.S. government needs to declare that a situation is an act of terrorism. There is a clear distinction between terrorism and civil disorder. In certain circumstances, your travel insurance company can help you to evacuate. They often offer a Political Evacuation benefit that would assist in covering the costs of leaving a country during a period of unrest.

How About Terrorism on Airplanes?

If a terrorist attack happens on another airplane before your trip, it is not a reason for trip cancellation. A terrorist attack that causes your airline to stop service for 24 hours may be covered by your travel insurance. If this happens while you are out of the country, contact the U.S. embassy or consulate and make alternate travel arrangements to return home safely. Always use good judgment in making your travel plans.

Tips for Staying Safe During an Incident

Terrorist attacks are the result of a methodical and deliberate strategy. However, there are sometimes targets of opportunity. The U.S. Department of State offers some practical tips on avoiding becoming a target of opportunity.

The tips offer some protection and may also serve as a deterrent to potential terrorists.