12 Surprising Facts About the World Cup 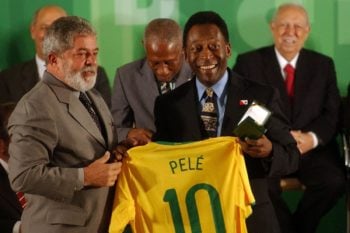 We all enjoy our football, and rightfully so. We’ve been playing “gridiron,” as it’s known in other countries, since 1869. If you’ve been fortunate enough to travel abroad, and I hope that you have, you’ve no doubt discovered that “football” in other countries isn’t football at all. Rather, it is what we call soccer, and if you think we’re passionate about our football, you haven’t been to a “football” game abroad! Just like our Super Bowl, the FIFA WorldCup is the crème de la crème of football matches. The 2014 World Cup is being held in Brazil, and the competition begins on Thursday, June 12, with the champion crowned on Sunday, July 13. So what’s so special about the World Cup? Check out these 12 surprising facts:

I’m a fan of both versions of football. While I thoroughly enjoy American football and look forward to a Super Bowl party annually, the roar of the crowds and the global impact that the FIFA World Cup championship garners is second to none. While some of my facts were fun and others were serious, all of them are a testimony to the fact that football, soccer to us, is truly one of the biggest sports throughout the world. The global competition and national pride rival that of the Olympics; the rabid fans rival those of NCAA and NFL football. FIFA was correct when it said the World Cup is the biggest single sporting event in the world. Turn it on and find out why. I guarantee that you will become a football fan of a different kind.

Looking to learn more about the World Cup? Check out these sites: